Sintok, 10 May 2016.
UPM took home the second prize for Engineering and third prize for Science and Technology at the Malaysian 2016 Three-Minute-Thesis (3MT) national competition held at Universiti Utara Malaysia here today.  The competition received 54 entries from universities from all over Malaysia.   UPM was represented by three PhD students, two in the Science and Technology category, and one in the Engineering category.

Gobindaran Raju won the second prize in the Engineering category with his presentation entitled “Red Alert Kuala Lumpur: Dynamic Behaviour of Limestone”.  His research focuses on the nature of rock samples taken from the Kuala Lumpur area and works towards a fundamental understanding of limestone’s dynamic behaviour.  The ultimate aim of his research is to help prevent earthquakes in potential earthquake areas such as Kuala Lumpur. Gobindaran is supervised by Dr. Zainuddin Md. Yusoff of the Faculty of Engineering.

Elson Lye Kwan Liang took the third prize in the Science and Technology category for his research entitled “Mesenchyma Stem Cells: Angels or Demons” which is a study on stem cells as a preventive measure for cancer.  The third contestant from UPM is Tan Niu Jin who presented her research on inventing a tool for saving premature babies, entitled “Saving the Tiny Angels”.   Niu Jin had earlier won first prize in the Bicara Tuntas 2015 (2015 3MT) hosted by Universiti Kebangsaan Malaysia in December last year.  Both Elson and Niu Jin are supervised by Assoc. Prof. Dr. Thilakavathy of the Faculty of Medicine and Health Sciences.

The contestant were trained by Putra Sarjana 3MT trainers from the School of Graduate Studies, the Faculty of Modern Languages and Communication, and Communication, and the Faculty of Medicine and Health Sciences. One of the contestans will be selecte to represent UPM at the Asia-Pecific 3MT competition in Queensland, Australia, in September 2016. 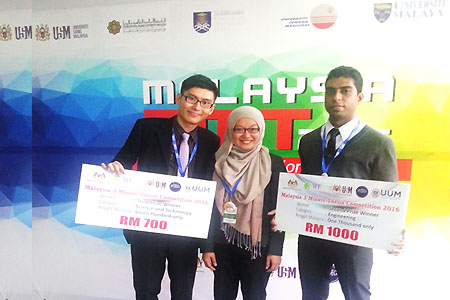