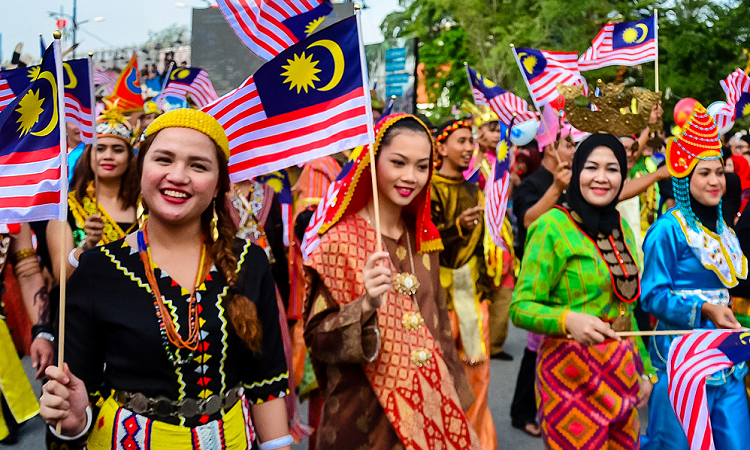 The country celebrated Malaysia Day yesterday, to commemorate the establishment of the Malaysian federation, in a lively atmosphere despite the country facing the Covid-19 pandemic.

Although people's movement is now limited considering the standard operating procedures set following the implementation of the Recovery Movement Control Order (RMCO), the spirit of love for the country was still evident in the new norm.

Without official celebrations in some states like in previous years, various parties took the initiative to enliven the celebration on a small scale.

The state-level celebration was also enlivened with pantomime performances themed on the fight against Covid-19 and songs by firefighters Syafiq Farhain, and members of the uniformed team, which took place at the National Youth Skills Institute yesterday.

In Sabah, caretaker Chief Minister Datuk Seri Mohd Shafie Apdal said the Malaysia Day celebration was quite important, especially for Sabahans to recall the history of the formation of Malaysia on Sept 16. He said the date was the starting point for Sabah and Sarawak to be free from the shackles of colonialism.

"That was the sacrifice made by past freedom fighters, when Sabah was once partially conquered by the Japanese, before achieving independence," he told reporters after the state-level Malaysia Day celebration at the Sabah International Convention Centre in Kota Kinabalu. Also present was Sabah Yang Dipertua Negeri Tun Juhar Mahiruddin and wife Toh Puan Norlidah R.M Jasni.

In Perak, although there was no official celebration organized by the state government but in Perak Tengah district, 35 people participated in the 'Perak Tengah District Heritage Tourism Convoy'. The ceremony was officiated by Perak Youth, Sports, Communications and Multimedia Committee chairman Khairul Shahril Mohamed involving a 30-kilometre convoy in several focus areas in Perak Tengah such as the Tomb of Sultan Muzaffar Shah 1 and Nasaruddin Rais Mini Gallery, aimed at introducing heritage sites in the district.

In Negeri Sembilan, the Department of National Unity and Integration celebrated Malaysia Day by holding a 'Lorong Ceria Merdeka' and 'Rumah Ceria Merdeka' competitions in addition to an independence talk slot. It was held in collaboration with the Bandar Warisan Puteri Rukun Tetangga neighborhood watch, attracting about 100 residents of the area.

In Penang, the Ministry of Tourism, Arts and Culture Penang Office, organised the 'Voluntourism Malaysia Clean and Beautiful Programme' at National Park, Teluk Bahang. Apart from that, the Teluk Bahang assemblyman's service centre office, organised the 'Konvoi Lautan Merah Hari Malaysia' programme which presented donations to veterans of uniformed services, who had served the country.

Meanwhile in Machang, Kelantan, more than 200 participants took part in a 'Merdeka Fun Ride 2020', which was also attended by Kelantan Umno chairman Datuk Ahmad Jazlan Yaakub. They cycled 25km and ended at the Knowledge Transformation Centre in Bukit Tiu.

In Terengganu, the State Tourism Department took the initiative to hold a celebration at the state's latest tourism location, Kampung Budaya Terengganu in Kuala Terengganu. Apart from the narration of the formation of Malaysia by the State Museum Board director Che Muhamad Azmi Ngah, the celebration was enlivened by several events such as the recitation of patriotic poems and singing of patriotic songs. - BERNAMA